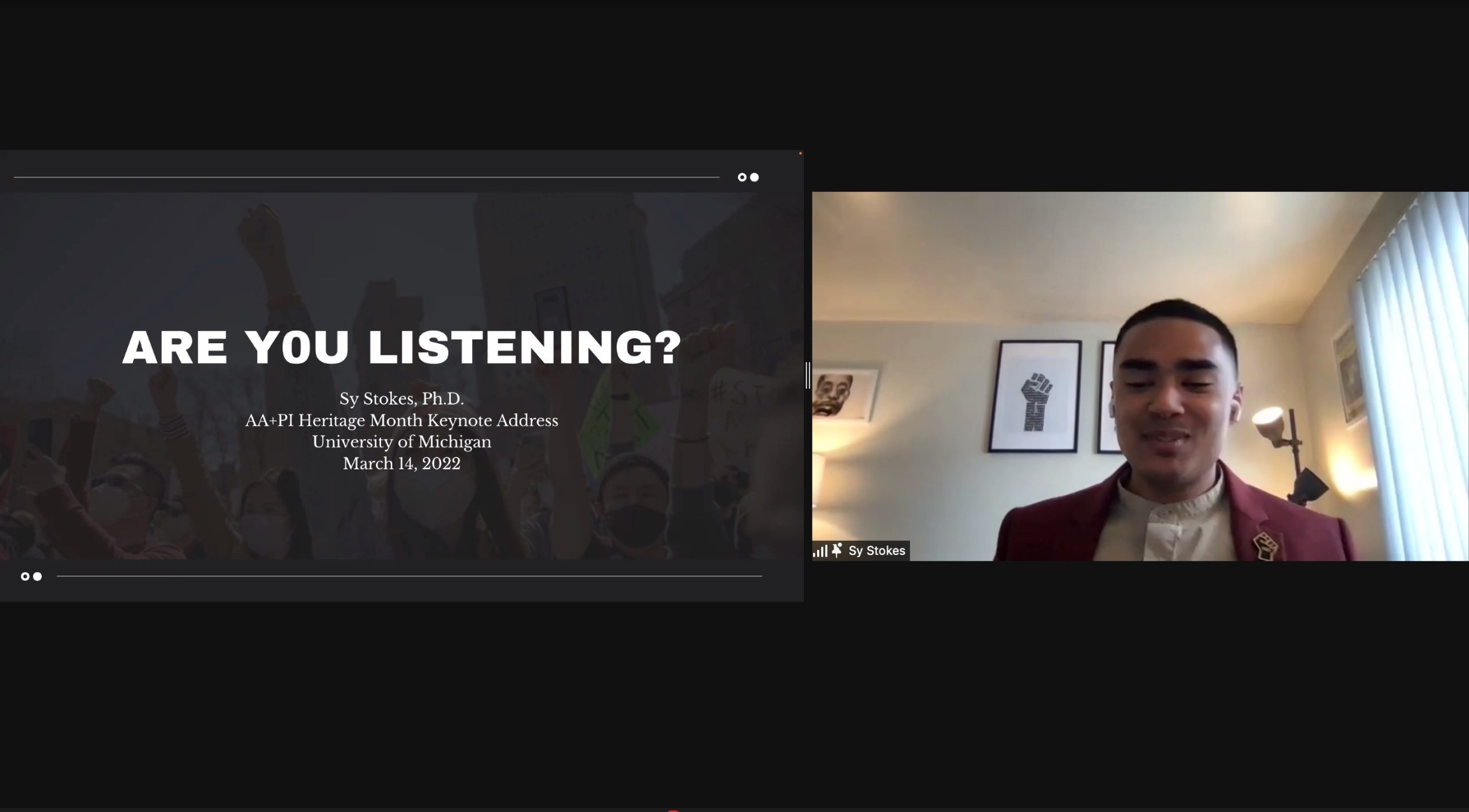 The University of Michigan kicked off its celebration of Asian American and Pacific Islander Heritage Month on Monday night with keynote speaker Dr. Sy Stokes, a former postdoctoral fellow for the National Center for Institutional Diversity (NCID). from UM, who discussed his research on campus racial climate. , equity and student activism.

Although Asian American and Native Hawaiian/Pacific Islander Heritage Month is federally recognized during the month of May, the Office of Multiethnic Student Affairs (MESA) and the United Asian American Student Organizations (UAAO) celebrate these communities. from mid-March to mid-March. -April.

The event opened with LSA sophomore Aarushi Ganguly, a member of the Asian American and Pacific Islander Heritage Month Planning Committee, introducing the theme for the celebration. year: “Are you listening? Oral histories and stories from AA&PI communities. »

“AA&PI populations have long been characterized as silent, which is a result of being overwhelmed by imperialism, monolithic stereotypes and white supremacy,” Ganguly said. “This Heritage Month, we hope to draw attention to the great diversity within these communities. We will create space for individuals inside and outside the AA&PI community to learn, reflect and grow.

Ganguly asked the audience to participate in a Google Jamboard, an interactive digital whiteboard that allowed participants to answer the question, “What is a story or tale related to Asian Americans and/or in the Pacific Islands that matters to you?” Some notes told traditional fables about perseverance, unity and selflessness. Other notes highlighted family experiences and histories.

In response to the prompt, public health junior Gina Liu shared a story about a time when her parents, who had recently immigrated to the United States at the time, almost got ripped off almost buying a timeshare – vacation ownership with a commitment to pay for annual trips to the same location—due to their identity as first-generation immigrants.

“(My parents) were new immigrants so they had no idea what a timeshare was and there were several sales people trying to come to them and trying to get them a timeshare but they didn’t have any. Did not have. “, Liu said. “Apparently it was like $100 for a weekend at Disneyland, so I respect that.”

To begin his presentation, Stokes presented a timeline of historical events that discriminated against Asian American and Native Hawaiian/Pacific Islander communities. He began by explaining three national laws – People v. Hall (1854), Page Law (1875), the Chinese Exclusion Act (1882) – which targeted Chinese immigrants on the basis of their race.

Stokes went on to explain the American-backed Hawai’i coup of 1893, in which a group of American sugar planters planned to illegally overthrow Queen Lili’uokalani, who risked her life to preserve Hawai’i. i. She eventually signed it in America to protect her citizens, who were threatened with hanging, Stokes said.

“More than a century later, Native Hawaiians continue to fight for their rightful land as the violent and unforgivable system of white supremacy obliterates them with skyscraper hotels, tourist attractions and increased land values ​​that have displaced families who have lived there longer than the American Empire even knew existed,” Stokes said.

Stokes also spoke of the plague in San Francisco in 1900, during which many people mistakenly believed that the disease only infected people of Asian descent. During World War II, the United States sanctioned Japanese internment camps, resulting in the mass incarceration of Japanese Americans, Stokes said. In 2001, President George W. Bush signed into law the Patriot Act, Stokes later explained, which consents to the indefinite detention without trial of immigrants.

“After the Patriot Act was passed, people are sharing these stories of how female students wearing hijabs were attacked, mothers and fathers lost their lives by white supremacist vigilantes, and families separated by this legislation. racist,” Stokes said.

The latest event on Stokes’ timeline was the 2017 Muslim Ban – a series of discriminatory executive orders and proclamations issued by the Trump administration that banned travel from seven predominantly Muslim countries: Iran, Iraq, Libya, Somalia, Sudan, Syria and Yemen.

“Once again, history repeated itself in 2017, when the Muslim ban led to an almost identical recycling of these xenophobic tropes and horrific consequences for Asian Muslims,” ​​Stokes said.

“I’ve started pretty much every keynote (AA & PI) in exactly the same way over the past two years,” Stokes said. “Because it is so important to emphasize that what we are experiencing today in our communities is by no means a historical anomaly, but rather a by-product of this long history of anti-Asian and US violence. United and beyond.”

Stokes also explained a six-step process for how legislation or “strong action” is taken against racial minorities, which he called The Meaning Spiral. According to Stokes, these stages include the identification of a specific area of ​​concern, the identification of a subversive minority, the link between the problem and the subversive minority, the notion of thresholds that lead to a growing threat, time prophecy most disturbing and finally, the call for “firm measures” or legislation towards the racial minority. Stokes used Donald Trump’s description of COVID-19 as “the Chinese virus” as an example.

“It’s not just the state inflicting this racist violence and legislation, as we witness the shootings in Atlanta, the attacks on our elders and Chinatowns across the country, from the 1982 murder of Vincent Chin to the murder of Christina Yuna Lee in 2022 and countless other instances of anti-Asian violence that we have witnessed recently,” Stokes said. “It’s mainly the racist vigilantes who are taking matters into their own hands.”

Chin, a Chinese American, was beaten to death by two white men in Detroit at a party after they suspected him of being Japanese – one of the men had recently lost his job in the automobile manufacturing and attributed his employment to the rapid growth of the Japanese automobile industry in the 1970s and 1980s.

During the COVID-19 pandemic, an increase in anti-Asian hate crimes has been spurred by popularized rhetoric used to describe the pandemic, including former US President Donald Trump’s labeling of the pandemic as the “virus”. Chinese”. Since March 2020, more than 10,000 hate cases targeting Asian Americans and Pacific Islanders, according to Stop AAPI Hate.

In March 2021, a 21-year-old white man walked into an Asian-owned massage parlor in Atlanta and opened fire, killing eight people, including six Asian women. As Stokes mentioned, Lee was found killed by more than 40 stab wounds after being followed home to her New York apartment in February 2022.

For the second part of the keynote, Stokes discussed current Asian American and Pacific Islander activism and shared her own story on the subject, including her awareness of the racism that has resulted from the movements. .

In the third part of the opening speech, Stokes shared her family history and her grandmother’s immigration story, saying she immigrated to America from Shanghai in 1948.

“(Our elders) share…similar stories, stories that remind us of our roots just as much as they remind us of our privilege,” Stokes said. “But when we hear stories about our elders who have been attacked in racist hate crimes, some of which have happened in the past few days, I can’t help but think they’re sacrificing everything to come to America, just to see their lives sacrificed in the name of America. People who cling to this distorted view of this country and who will stop at nothing to hurt our loved ones who have done nothing but the audacity of want a better life.

“Now, as we read this, I want you to remember what is happening across the world to your loved ones, the fear they have, the fear they carry with you,” Stokes said. “It’s a fear that I carry with me every day. I want us to sit down with this as the conclusion to this speech, six words, filled with uncertainty and tragic implications. I want you to ask yourself, “Who are you fighting for?”

Daily journalist Anna Fifelski can be contacted at [email protected].