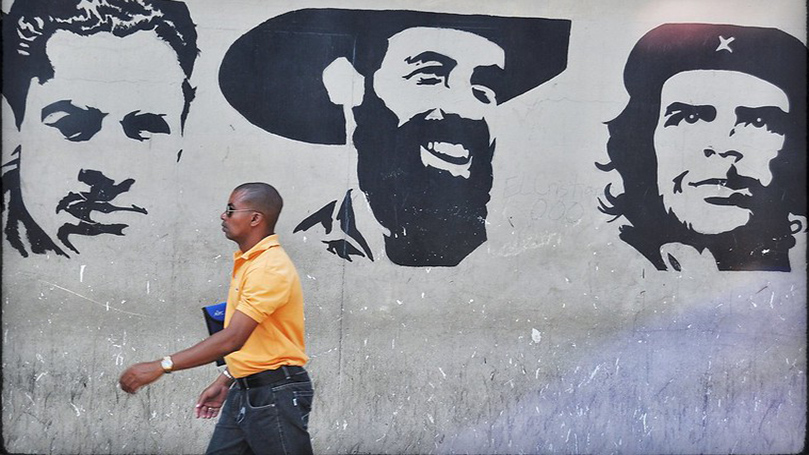 In 1988, there was a big march and a demonstration in Harlem from 125th Street. The main banner of the march read: “Africa called – Cuba answered”. It was a bold statement in support of Cuban military assistance to Angola, which was under attack by internal counterrevolutionary forces, supported and pushed by the apartheid South African army. In the battles that followed, nearly 5,000 Cuban soldiers gave their lives for African freedom. With Cuban help, the Angolan government defeated the South African army, which led to the consolidation of the Angolan revolution, the independence of Namibia and, a few years later, the collapse of apartheid in South Africa.

Nelson Mandela, during his first visit to Cuba, noted:

What other country has such a history of selfless behavior that Cuba has shown for the African people? How many countries benefit from Cuban health professionals and educators? How many of these volunteers are now in Africa? What country has ever needed Cuba’s help and not received it? How many countries threatened by imperialism or fighting for their freedom could count on the support of Cuba?

There has also been a long relationship between socialist Cuba and African Americans. Cuba has repeatedly hosted and provided security and support to African-American activists who have suffered violent police assault.

So, it’s no surprise that the Black Lives Matter Global Movement (BLMGM) is raising its voice in support of the Cuban revolution. In a statement released last July, they wrote:

Black Lives Matter condemns the inhumane treatment inflicted on Cubans by the US federal government and urges it to immediately lift the economic embargo.

This cruel and inhuman policy, instituted with the explicit intention of destabilizing the country and undermining the right of Cubans to choose their own government, is at the heart of the current crisis in Cuba. Since 1962, the United States has imposed pain and suffering on the Cuban people by cutting off food, medicine, and supplies, costing the small island nation an estimated $ 130 billion. . .

Cuba has historically shown solidarity with oppressed peoples of African origin, protection of black political prisoners, revolutionaries like Assata Shakur by granting them asylum, support for black liberation struggles in Angola and Mozambique, in Guinea-Bissau and South Africa.

A misguided professor, who was born and educated in Cuba but moved to the United States, added:

BLM’s sympathy for the Communist government of Cuba is imbued with a sentiment of Cuba as it was in the 1980s – and that Cuba no longer exists. Like the United States, Cuba has a long history of slavery, followed by various forms of institutional racism. The Cuban Communist Revolution in 1959 created socio-economic opportunities for black and mixed-race Cubans. The resources of the former Soviet Union helped support the economy and reduce historical disparities. Cuba under Fidel Castro was a dictatorship, but it is also true that racial equity in education, life expectancy and employment improved for some time during his tenure.

What the well-meaning professor seems to ignore, while at the same time acknowledging, is that the Cuban government made great strides towards “racial” equality from 1959 until the 1990s. What limited such progress, it is the American embargo and the constant hostilities against Cuba by the United States

There is a long discourse among academics and activists about racism in Cuba. Most of them, whether pro-revolutionary or anti-revolutionary, admit that significant steps were taken to abolish institutional racism by the early Cuban government. With the collapse of the Soviet Union in 1991, Cuba entered a “special period” in which its economy suffered greatly as the US embargo had an increased effect. Slowly, the Cuban economy began to recover due to the expansion of the Cuban tourism industry in the mid to early 2000s and the easing of the embargo by Obama much later.

Then Cuba was hit by two disasters – the Trump administration and the Covid-19 pandemic. The Trump administration resurrected the sanctions that Obama had relaxed and significantly tightened the embargo. In Trump’s last week in office, he added 240 more sanctions – including marking Cuba as a “state sponsor of terrorism (due to its support for Venezuela), stopping remittances, banning ships from Americans cruise entering Cuba and cracking down on educational travel. These are estimated to have cost the Cuban economy more than $ 20 billion.

In addition to the embargo, the US government spends $ 20 million per year on Cuban “pro-democracy” organizations and an additional $ 28 million on the Office of Cuba Broadcasting, which handles Radio’s relentless anti-government propaganda. and TV Marti.

When the Covid-19 pandemic struck, it dramatically increased the impact of restrictions on the Cuban economy resulting from the embargo. This created the conditions for the Cuban economy to contract. And, as in any economy in crisis, the poorest strata of Cuban society have been hit the hardest. That this poor section is probably disproportionately made up of people of African descent is a fact of the long global history of slavery and racism.

It is clear that the US embargo is the main obstacle to improving the lives of all Cubans, especially people of African descent. Therefore, the main demand of activists in the United States must be to end the embargo. We, supporters of the Cuban Revolution, believe that the Cuban people are able and willing to resolve their internal problems. Our job is to ensure that the US government does not obstruct this process.

Organize its community to demonstrate against the US embargo on Cuba, work with unions and community groups to educate about the embargo and support Cuba, write to its representatives and senators, and call for an end to the US imperialist intervention in other countries, and to peace, are ways to advance this struggle.