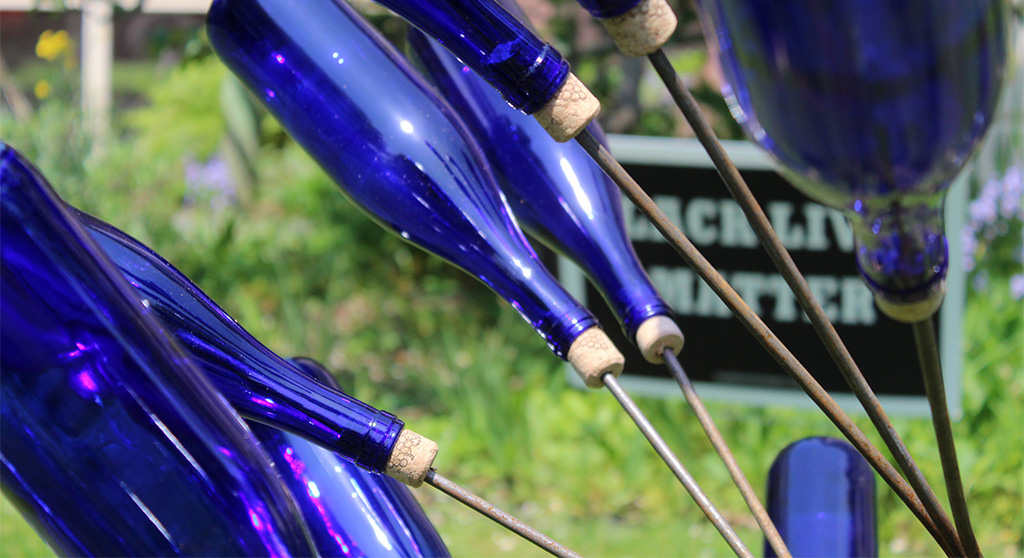 The tradition of bottle trees such as the “Forgotten Souls of Tory Row” installation was brought to the Caribbean and the southern United States by slaves and passed down from generation to generation. (Photo: Cambridge History)

“Forgotten Souls of Tory Row: Remembering the Enslaved People of Brattle Street”, the bottle tree installation now visible at History Cambridge headquarters (159 Brattle St.), was inspired by a custom that originated in the Congo in West Africa long ago. The bottle tree tradition was brought to the Caribbean and the southern United States by slaves and passed down from generation to generation. While bottle trees mean different things to different people, it is agreed that bottles are placed on tree branches to destroy evil spirits and to capture the energy, spirit and memories of ancestors.

The beautiful grove of blue bottle trees installed by Black Coral represents the people – adults and children – who were enslaved by the owners of the mansions of Brattle Street in the 18th century (many of whom amassed fortunes from their plantations in the Caribbean). The sculpture aims to honor the memory and humanity of the slaves who lived and worked on Brattle Street. For a more in-depth understanding of the links between Brattle Street and the slave trade, see “The Sugar Planters of Brattle Street”, a lecture by Caitlin Galante D’Angelis Hopkins, former research associate at the Harvard and slavery project.

Since history is written by those with money and power, we know very little about the slaves who lived in Cambridge, but we do know that they were here. We know this from their tombstones and from the letters, records, wills and legal documents associated with the people who owned them. For example, the History Cambridge archives contain notes taken by Nicholas Hoppin, rector of Christ Church in Cambridge from 1839 to 1874, about an undated conversation he had with Darby Vassall, son of Anthony Vassall, a slave. Darby told Hoppin that he was born in the home of John Vassall (now the Longfellow household) in 1869. His father, Anthony, was a coachman for Henry Vassall, one of the Brattle Street locals deeply involved in the slave trade which owned vast sugar cane plantations. in Jamaica and Antigua. According to Darby, his father was “invited from Spain on the pretext of seeing the country” and when he arrived in Jamaica he was “sold to Henry Vassal [sic] which brought him to Cambridge.

Like many slaves who lived here, Anthony Vassall came to Cambridge – unwillingly – via the Caribbean. While the historical reasons for the Cambridge-Caribbean connection are deeply rooted in the tragedy of slavery, today Cambridge and surrounding areas have a thriving community of people of Afro-Caribbean descent.

A few years ago, Cambridge History’s Caribbean Heritage Oral History Project conducted interviews with nine Cambridge residents born or with roots in the Caribbean. Their areas of ancestry included Barbados, Haiti, Jamaica, Puerto, Rico, Suriname, and Trinidad. You can read more about the interviewees and listen to their stories on the History Cambridge website. These interviews help us understand what it is to be from Cambridge and the Caribbean. (Be sure to also check out our self-guided tour Caribbean community in the port.)

June is National Caribbean Heritage Month, and History Cambridge would like to invite you to tell us your stories: What is your connection to the Caribbean? Were you moved by the installation of the bottle tree and the history it represents? You can complete this short survey or email us at [email protected] and arrange to give us your own more detailed oral history. Either way, we look forward to hearing from you and hearing your stories.

Celebrate Cambridge’s Caribbean heritage this summer! For a family-friendly Caribbean food festival, be sure to check this year Boston JerkFest July 2. And the Cambridge International Carnivala colorful and festive celebration steeped in African tradition, will mark its 29th year of operation this fall on 11 September.

History Cambridge began in 1905 as the Cambridge Historical Society. Today we have a new name, a new look and a whole new mission.

We engage with our city to explore how the past influences the present to shape a better future. We strive to be Cambridge’s most relevant and responsive historical voice. To do this, we recognize that everyone in our city knows something about the history of Cambridge and that their knowledge is important. We help people share the story with each other – and weave their knowledge – by giving them the floor, the mic, the platform. We illuminate where historical perspectives are needed. We listen to our community. We live by the ideal that history belongs to everyone.

Our theme for 2022 is “How Does Cambridge Work?” » Make history with us at cambridgehistory.org.

Marni Zea Clippinger is a board member of History Cambridge.