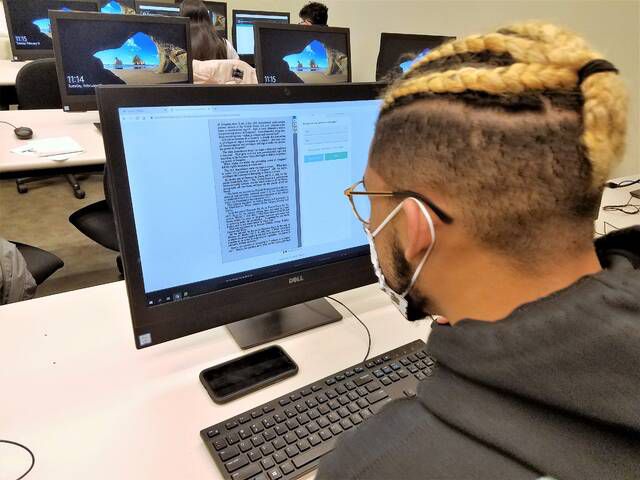 WILKES-BARRE — Zack Paraway conceded with a chuckle behind the face mask that he’d love to get course credit for transcribing old images scanned from the computer screen into searchable text, painstakingly figuring out how to read outdated fonts.

But there were bigger reasons to delve into the archives of the Colored Conventions of the 1800s.

“I want to be informed, to know the context of what happened and how we got here,” said the Wilkes University communications freshman, taking a brief break after participating in Douglass Day. Transcribe-a-thon Tuesday morning.

This is Wilkes’ third year of participation in the event, which involves numerous schools and organizations working through cloud-based internet technology to make ancient documents related to black history in America more accessible. Held in honor of African-American reformer, activist, abolitionist and statesman Frederick Douglass, the event allows volunteers to access digitized historical documents through Zooniverse, transcribing them online into searchable text documents.

It is held this time each year in part at a whim of Douglass himself, who escaped slavery to become one of the nation’s most distinguished reformers. Amy Sopak-Joseph, an assistant professor of history at Wilkes, explained that Douglass didn’t know his date of birth, so he arbitrarily chose February 14 — Valentine’s Day. The transcribe-a-thon is held on or near this date both to honor Douglass and as part of Black History Month.

This year, attendees focused on a wide range of archival material from the Colored Conventions, which Sopak-Joseph said was the longest-running 19th-century campaign for black civil rights. Douglass was heavily involved. Groups of black activists at the local, state and national levels began to gather in 1830 to “discuss and debate the work to extend the rights of blacks,” she said. Initially, the conventions focused primarily on the abolition of slavery, but they continued well beyond the American Civil War and the liberation of slaves.

Because the documents come from conventions, not from an individual person, Sopak-Joseph said, there is an additional element to the project this year: try to learn more about the many people who wrote the digitized documents, which included minutes of convention meetings, correspondence between those involved, and newspaper accounts of the proceedings, among other documents.

Sophomore criminology student Juan Ortiz was transcribing the beginning of the minutes from one of the conventions and admitted it wasn’t a particularly compelling read. But he still found the work interesting. “It’s kind of hard to find the fonts,” he said. “And they used words and language differently.”

The 2022 budget balances growth and consolidation; room for maneuver created to reduce the budget deficit