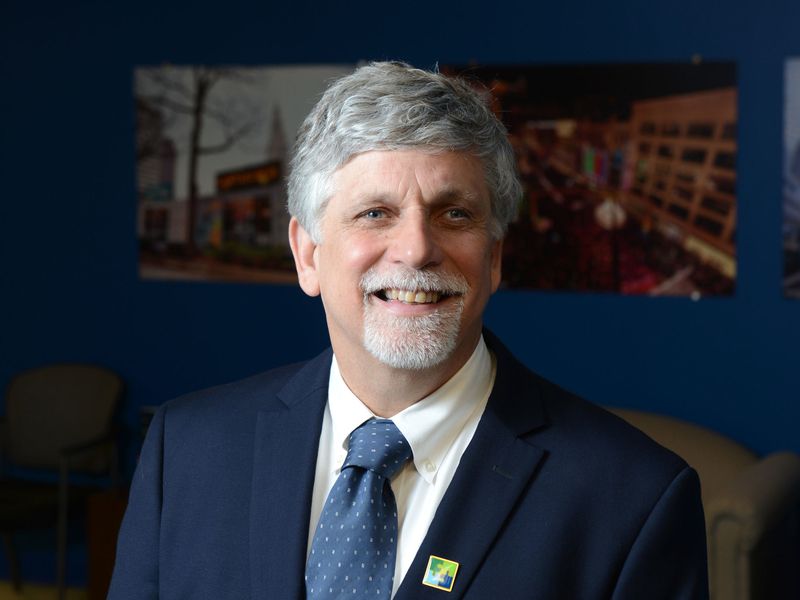 Tom Yablonsky, a relentless promoter of downtown Cleveland and historic preservation to give it a future, has announced plans to retire in November from his trio of downtown roles.

The move also resulted in a consolidation of staff roles at the downtown Cleveland Alliance, where they served as Executive Vice President since its inception. Staff of Historic Gateway District Neighborhood Corp. organizations and Historic Warehouse District Development Corp. Yablonsky previously worked with has been realigned as DCA personnel.

Yablonsky, 66, may be stepping down from his leadership role in the city’s central business district, but he will continue to push forward the renewal of downtown Cleveland in several ways.

Michael Deemer, president and CEO of DCA, said in the Friday, Sept. 10 press release announcing Yablonsky’s retirement plans, â€œDowntown Cleveland would not be the authentic, unique and rapidly growing neighborhood that it is. ‘he is today without the leadership (of Yablonsky). Its impact, especially from the point of view of historic preservation and redevelopment, is immeasurable. The success of the Gateway and Warehouse Districts is due in large part to (Yablonsky’s) vision, specialist expertise and historical knowledge, and we are very grateful for his many contributions. “

In the release, DCA listed some of these contributions, particularly through the adaptive reuse of old buildings using federal tax credits first and later for historic preservation in Ohio.

The statement noted that Yablonsky had established himself, along with downtown Cleveland, as state and national leaders in historic preservation, receiving the prestigious “Preservation Hero” award from Heritage Ohio. During his tenure, he set up or helped launch several historic preservation initiatives, including the Cleveland Historic Conservation Easement Programs and the National Register’s eight downtown historic districts.

Additionally, Yablonsky was the founding member of the board of directors of Canalway Partners, which led the implementation of the 110-mile National Heritage Zone from New Philadelphia to downtown Cleveland. He was also the director of downtown development for the former Greater Cleveland Growth Association.

The original structure of the DCA and the Local Development Corporations was established through a series of negotiations that laid the groundwork for the Downtown Cleveland Alliance Board of Directors and a Board that administers the Business Improvement District. downtown by overseeing security, maintenance and other programs. This has evolved since the local development companies and DCA in 2014 moved into the same office in a building at 1010 Euclid Ave.

Each of the neighborhood councils will retain their independent 501 (c) (3) status, while Deemer will serve as chief executive for all three organizations. DCA will provide full services to the Warehouse District and Gateway District through this alignment.

Cassidy, DCA’s vice president and COO for Neighborhood Engagement, is responsible for the day-to-day operations of the Historic Gateway and Historic Warehouse neighborhoods. DCA will soon be looking for candidates for two Ward Director positions, responsible for providing personnel support to each respective ward.

Additionally, DCA has created a position to focus on site planning and improvement initiatives, as Starinsky moves into the role of Vice President of Urban Planning and Design.

Kira Hennessey, Chairman of the Board of Historic Gateway, said in the statement, â€œTom Yablonsky’s influence can be seen on virtually every historic building in our neighborhood. His continued leadership and expertise have provided a tremendous opportunity for the protection and growth of both neighborhoods and organizations. His efforts have been essential to the successful development of Cleveland’s authentic historic neighborhoods. We are delighted that (Yablonsky) is continuing historic preservation programs after stepping down as Executive Director. “

Maribeth Feke, Chairman of the Board of Historic Warehouse, said in the statement: â€œ(Yablonsky’s) leadership and over thirty years of involvement with (LDCs) and DCAs have paved the way for this next evolution. in the collaboration of our organizations. We are delighted to continue the important work of serving the inner city neighborhoods through the resource efficiency and staff increases that result from this new structure and I wish it every success in its transition to a new phase. of his life. “

Yablonsky said in a telephone interview that he was satisfied with the organizations’ staffing plans, which were developed through negotiations with Deemer and his predecessor, Joe Marinucci.

â€œThe past 40 years have been a whirlwind, and there is a lot of history and significant achievements the team can build on to move forward,â€ Yablonsky said in the statement. â€œI am grateful to have played even a small role in building the foundations of the Gateway and Warehouse neighborhoods, including programming and partnerships, while setting the stage for many exciting developments to come.

Yablonsky in the interview credited many people who supported the vision to improve downtown redevelopment through planning and collaboration.

“I always thought we did more through collaboration than by fighting,” he said. “And when it comes to downtown Cleveland, I always felt the glass was half full of opportunity rather than half empty.”

After leaving DCA, Yablonsky said he would continue to consult with DCA on the historic easement program and heritage tourism efforts.

These include DCA’s Take a Hike program, where actors play historical figures from the city’s past encountered by groups visiting the city, and the multi-day Cleveland History Days.

He will remain on the boards of Preservation Ohio and Canalway Partners. Yablonsky said he plans to work on the history of the creation of the eight historic downtown districts. He saw neighborhoods as a key to obtaining tax credits for redevelopment projects that retain the character of buildings over 50 years old while giving them new apartment or hotel life.