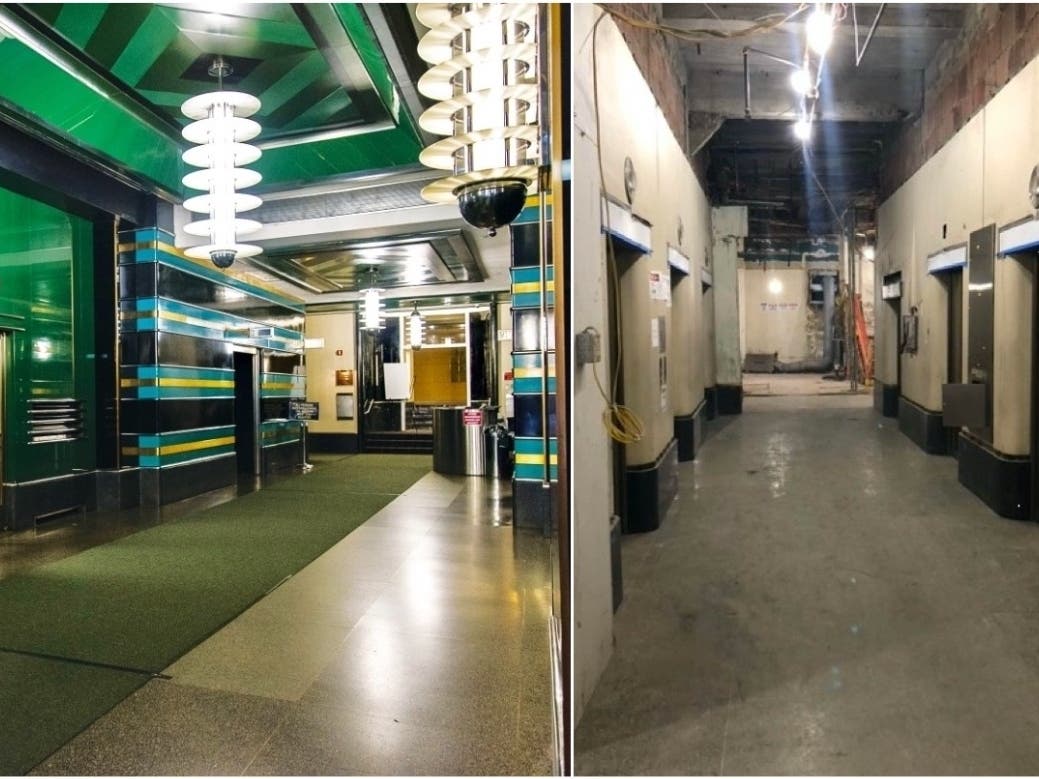 HELL’S KITCHEN, NY – A battle to preserve what remains of a beloved art deco-style lobby in a Hell’s Kitchen apartment building is set to resume this week, months after the building’s owner began ripping off historic elements.

The McGraw-Hill Building, an iconic blue-green tower on West 42nd Street near Ninth Avenue, became the center of a legal battle this spring when its owner announced plans to renovate its facade and interior. This included plans to clear the lobby of the building, a shiny space clad in colorful steel bands separated by gold tubes, completed by architect Raymond Hood in the 1930s.

A wink rendering showed the lobby to look unrecognizable, with what critics called a minimalist “Apple-Store-Style” design.

The conservatives filed a lawsuit, asking a judge to force the building’s owners to restore historic materials. Although state Supreme Court judge Eileen Rakower refused to make an order that would have immediately halted the demolition, she let the case continue.

Lawyers will return to court for the first time since May on Friday. And although some titles implicit in March that the damage is already done, lawyers say it is not.

Theodore Grunewald, one of the plaintiffs behind the lawsuit, said he learned in recent months that much of the original horizontal striped strapping – as well as other key items such as the chrome door frames , the clock, radiators and emerald green porcelain panels – stay “in situ” in the lobby, and can be pushed back at any time.

â€œThere is something to be preserved,â€ Grunewald told Patch. “Not only is there something intact that is in its original location, but all of the parts still exist.”

While the owner of the building, Deco Tower Associates, has already pledged to incorporate some of the original elements into its future design, Grunewald hopes the lawsuit will eventually force them to the negotiating table, where they may be forced. to bring the hall closer to its former glory.

“It is quite possible that if we prevail in our lawsuit, we can force the owner to close the lobby,” he said.

If they are successful, Grunewald and his fellow advocates plan a second push: to convince the city’s Monuments Preservation Commission to designate the McGraw-Hill lobby as a historic monument. (A previous rushed effort to mark the gap before demolition began failed this spring.)

Other people who have joined the campaign to save the lobby this spring include Community Board 4, the Art Deco Society of New York, and elected officials such as State Senator Brad Hoylman and Chairman of the Board Corey. Johnson.