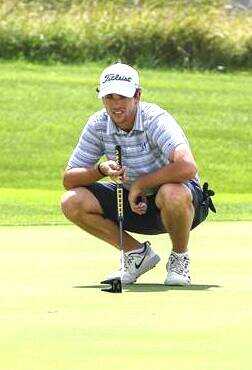 Ethan Gough, a freshman at McCook Community College, leads all golfers with a par 69 of three under par after the first round of the MCC Invite on Thursday.

McCOOK, Neb. ?? McCook Community College has a one-shot lead over Eastern Wyoming after day one of the MCC Invite at the Heritage Hills Golf Course. MCC shot a 10 of 298, and three golfers are in the top six, including Ethan Gough (Hillcrest, South Africa) who leads the first round.

?? It was a good day for MCC at Heritage Hills on a hot and humid day, ?? MCC coach Tyler Loop said who knows the slim lead over eastern Wyoming will inspire some determination tomorrow by the Lancers.

?? I guess we will need an equally good, if not better, score to get to the top, ?? said loop.

Eastern Wyoming and McCook both have three top six golfers in the individual standings.

Gough holds a three-stroke lead over EWC’s Tim Van Stiphout. MCC freshman Jordan Bingham (South Jordan, Utah) is in third place with a total of 73, he competes as an individual and his score did not count towards the score of the team.

MCC rookie Payton Craw (McCook) is tied for fourth with five other golfers who posted a brace of 74 on Thursday.

Freshman Braden Dahl (Hillcrest, South Africa) is in ninth place with a score of three of 75. sophomore Adam Durban is tied for 10th place with a 77 in the first round.

?? They are a strong and smart team and they are hungry to win so I expect tomorrow to be very competitive. ?? said loop.

The second round starts at 10 a.m. on Friday.

CLASSIFICATION OF TEAMS AFTER THE FIRST ROUND