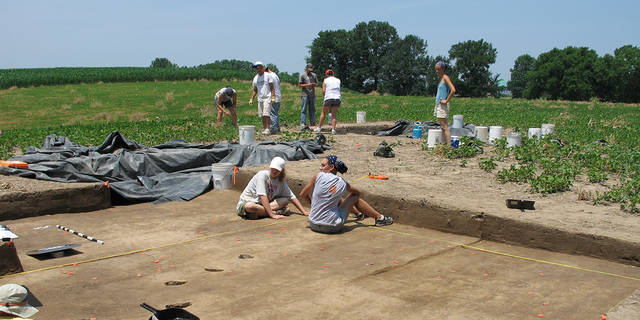 EDWARDSVILLE – “In Our Own Backyard: SIUE Investigations of the Gehring Site”, featuring anthropology professor Julie Zimmermann, is the latest Madison County Historical Society (MCHS) video in its online lecture series.

The Southern Illinois University Edwardsville Gehring site is located on the university campus between Cahokia Creek and Bluff, eight miles north of Cahokia Mounds. Since 2009, Zimmermann has been running the SIUE archaeological field school at the Gehring site. She is also a professor and chair of the anthropology department and coordinator of Native American studies at Southern Illinois University in Carbondale.


Zimmermann is also a professional archaeologist. Her specialty in archeology is zooarchaeology, which means she is an expert in identifying the bones of prehistoric animals.

So far, work has shown that the site has been in use from the late Paleo Indian period to historical periods, but most intensely during the Middle Woodland periods, around 2000 years ago, and the Mississippian, about 1000 years ago.

Investigations at the Gehring site will discuss the findings at the site, where Zimmermann’s primary research interest relates to the occupation of the middle forest (Hopewell). Although virtually all archaeological periods are represented at the site, the Mississippian turned out to be the most important.

In Our Own Backyard: SIUE Investigations of the Gehring Site is available now at https://madcohistory.org/speaker-series-julie-zimmermann/.

Part of the program includes an appeal to local residents who may have found artifacts at the site over the years. Zimmermann would like to document what was found and where, she said, but the artifacts would remain the property of the discoverer.

This is the fourth program in MCHS’s online series, which has previously examined the 1860 election, the lynching of Robert Prager, and the African American community of Pin Oak Township. The August program will focus on Italian immigration to Madison County.