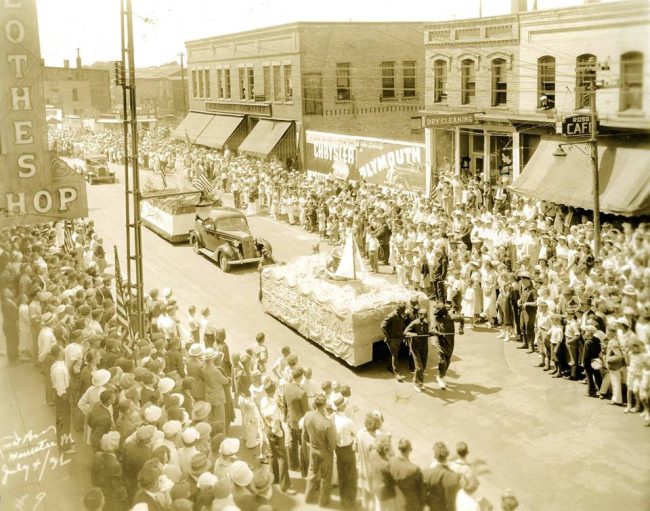 The first Manistee National Forest Festival began when a group of like-minded individuals decided to do something different from what had always been done before.

Summer festivals have a long and storied history with the town of Manistee. From the late 19th century, the main summer festival was called “Homecoming” as it was not just to celebrate the 4th of July, but to welcome former residents who had moved to Manistee . Alongside the Homecoming, there was a typical series of summer festivities which included dancing, picnics and a parade.


In the summer of 1935, the Homecoming Festival included a tour of the Manistee National Forest as well as a parade that included many displays from the U.S. Forest Service. With this back-to-basics aspect considered a success, it was decided that next year’s summer celebration would be replaced with a forest theme and focus on the Manistee National Forest purchasing unit, which has was created in 1933.

An article published on July 11, 1935 (just days after the Homecoming Festival of that year) explains the formation of a new festival society. Parts of the original article follow:

“From the rich historical background of its early days of logging and the promise held for future forest development throughout the Manistee National Forest, the City and County of Manistee will draw material for an annual forest festival that will rival with any celebration in Michigan, according to plans formulated yesterday afternoon by a group of local men assembled in the Ranger’s office of the Federal Building.

“The Festival, it is expected, will replace the annual 4th of July return, although alumni are invited to attend each year, it will be national in scope, the first effort of its kind in the world to draw attention to the reconstruction of the country’s forest resources.

“Yesterday’s meeting of a small group of interested people was preliminary to the formation of a Forest Festival Corporation, in which all organizations in the city will be represented.

“Work on the Festival will begin immediately, securing some of the necessary funds months before the event. Benefit shows, dancing, games of keno, some held under the auspices of the Festival Corporation and others under cooperating groups have been advanced as a way to raise at least $1,000 in preliminary fundraising efforts before April or May of next year.Full cooperation from the US Forest Service has been assured.

Additionally, it was also noted that the official name of the new festival would be the Manistee National Forest Festival and that its creation, “…is an attempt to bring back the glamor and color of the logging era, to show the area as a summer playground, and to draw attention to the development due in this part of the state as a result of federal and state programs emphasizing conservation, recreation and reforestation.

Over the months, donations were solicited through letters sent to chains and businesses that served local retailers. Other funds were donated by individuals and businesses and as the $6,000 goal neared its target, local factories chirped every time $500 was donated.

As is tradition with many festivals in the region, the subject of selecting a queen to rule the festivities came up during the early planning stages. In November 1935, a 20-year-old Ottawa woman named Wabisheshikwe, who lived in Lower Brethren Camp near the Manistee River, was named the Indian Festival Princess.

While Wabisheshikwe was originally used as a marketing ploy to promote the Forest Festival, it was later judged that since the festival was to emphasize the old days of logging (with less of emphasis on the modern world), the edict was issued that there would be no queen of rest because “…the celebration of Manistee would gain distinction by eliminating a queen and concentrating on the Indian princess which would be truly symbolic of the whole theme of the festival.”

The list of events and activities that took place (July 2, 3, 4 and 5) during the first festival is exhaustive but included: the inauguration of Chittenden Nursery, a village of Indian tipis displayed near the channel of the Manistee River , naval training ships on display in the channel, coronation baseball games, a State Police exhibit at Rotary Hall, local historical exhibits, forest fire demonstrations, a ceremonial dance in Ottawa, a large parade with 75 allegorical floats, banquets, marching bands, log rolling contests, etc.

On July 6, 1936, the first Manistee National Forest Festival was considered a resounding success with over 50,000 people in attendance. The Forest Festival continued as the town’s summer festival for several years, but was later replaced by the Sports Festival in the 1950s.

Brick by brick, an era is coming to an end | News, Sports, Jobs