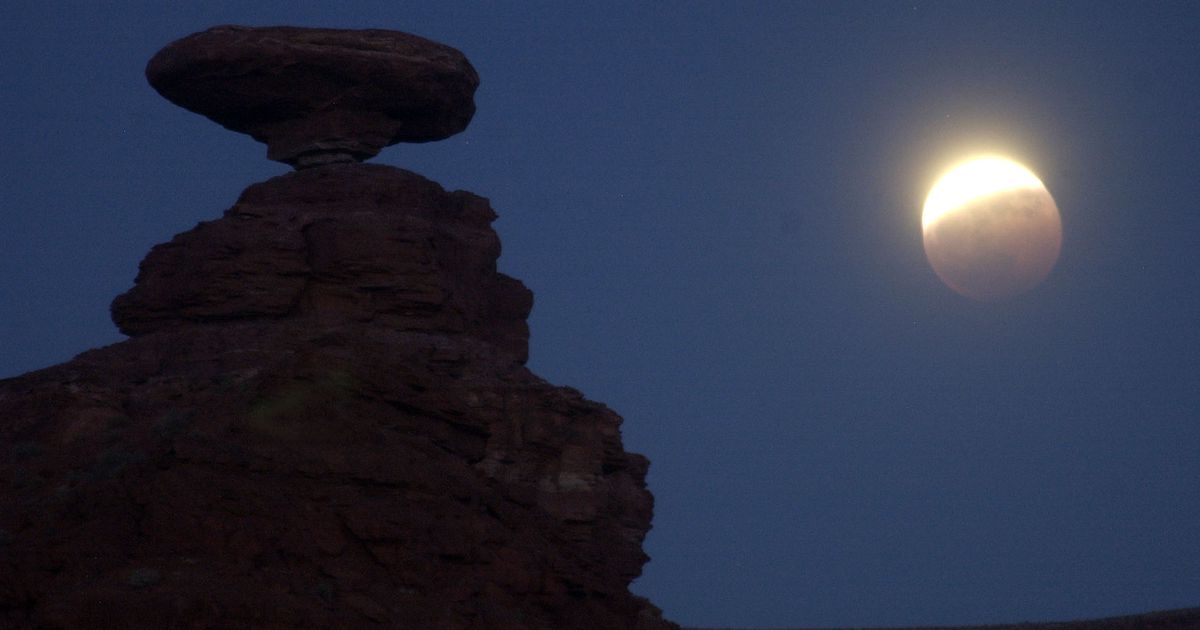 Professor SUU’s new book, â€œBeyond the Mapped Stars,â€ is out this week.

(Al Hartmann | The Salt Lake Tribune) In this file photo, the moon glides toward the total eclipse as it looms over the canyon wall with the sombrero rock formation upside down just upside down exterior of Mexican Hat, Utah. A new novel for young adults centers on a pioneering Utah Latter-day Saint who aspires to be an astronomer.

Authors and publicists contact me often enough to feature new books, and most of those submissions are general emails from people who don’t read this column or don’t know its audience. So it was incredibly refreshing recently to hear about a new Knopf young adult novel that ticks so many boxes for my readers: Mormonism, Feminism, and American History.

Coming Tuesday from the Knopf Books for Young Readers print by Penguin Random House, “Beyond the Mapped Stars” is the story of a young Latter-day Saint in pioneer Utah whose heart tells her that she is supposed to become an astronomer, but whose family and church tell her to get married and cut back on her studies. How can she stay true to her faith and her family while honoring her love of science and learning?

Utah author Rosalyn Eves had previously published fantasy fiction YA as part of the Blood Rose Rebellion series, so this foray into historical fiction – based on her own family history – breaks new ground for 12-year-old readers and more. I really enjoyed reading it and talking with Eves, who is an English professor at Southern Utah University. This conversation has been edited for length and clarity.

Where did the idea and the characters come from?

I was listening to an NPR interview with David Baron about the 1878 eclipse, and it was such a fascinating story, about all these people who converged on Denver and the impact it had on American science. But I started to think, what would that be like for people who were already in the West? Because the whole story was about people who came from the intellectual centers of the east to the western border.

What if you were someone who wanted to be involved in this, to be an astronomer, but had no way to bridge that gap? You’re in a border town with limited education and resources, and you’ve never seen anyone do what you want to do.

The main character was born because I went back to my own family history and found my grandfather’s grandmother, who was 18 in the summer of 1878. And then I just made a bunch of researching her and her marital status and the area where she grew up I was lucky because my cousin married a woman from Monroe so she took me to town. She showed me the old Collings hut which is still standing and which belongs to one of the families in the novel.

You suggest in the afterword that the novel has a bit of your own history of being a Mormon, but not always agreeing with things that have happened in the church. Can you talk about it a bit more?

It’s hard to read the story and not realize how wrong they got on race issues. When you come back you see that Joseph Smith ordained people like Elijah Abel [sometimes spelled Able] to the priesthood and that this restriction on the priesthood was truly an invention of Brigham Young. Paul Reeve’s book â€œReligion of a Different Colorâ€ was so insightful and helpful to read, and made me realize how the LDS Church spent most of the 20th century trying to prove they were white. A lot of the racial stuff that comes out of that is really troubling. And then, of course, I don’t agree with the church’s position on LGBTQ issues, and I know from some of the things I’ve read that you’re kind of in the same boat.

So there is this tension. I guess I feel my church the way I feel my country, that is, there is a lot of things that I love about it and a lot of work that remains to be done.

There aren’t many nationally released books with LDS main characters. When you get them, the narrative is that the main character has faith but also has questions, and they end up leaving their conservative faith for a more progressive faith. I wanted to open up a space where they could have both. Because I think a lot of people, especially teenagers, are in this space where they believe and care about their tradition, but there are also a lot of things that they don’t agree with. It is very clear that the rising generation does not agree with all of the official positions of the church. I wanted to write a story that was comfortable with questions. I don’t know if it happened, but that’s what I was trying to do.

It is definitely over. What did you learn about 19th century Mormon life that surprised you?

Two things surprised me, and they’re kind of in tension with each other. One is how the church could be a part of everyone’s daily life. They had two meetings on Sunday. They had midweek meetings. They had fast days on Thursdays and they were encouraged to join religious organizations like the Association for Mutual Improvement (which became Young Women / Young Men), which had just started, and the fallback associations.

At the same time, the activity of the church was quite low. We think of these early pioneers as being so devout and faithful. But for some of them, coming to Utah was their great manifestation of faith, and their activity rate hovered around 25 or 30%.

The other thing is, I don’t think I was so aware of the role of women giving blessings until I really started to research. I have to say it was also a little disheartening, that the women in the 19th century church had a lot more autonomy and spiritual authority than the women of today. They ran their own meetings, they had their own finances and their own magazines, and then they gave spiritual blessings, which were really beautiful to learn. So that was something I wanted to put in the book. I am grateful that my editors allowed me to keep it.