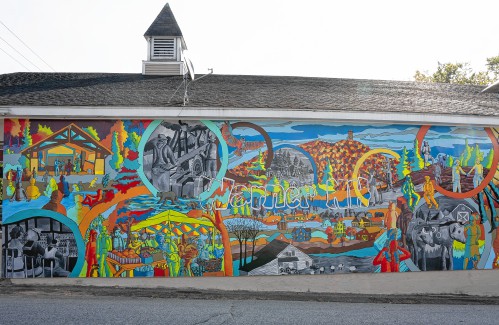 “The murals are like covered bridges, people come out to see them”

After nearly two tumultuous years, Warner’s Main Street has a new ray of hope, despite the challenges local businesses have faced.

Over the weekend, the Economic Development Committee unveiled a huge 50-by-12-foot mural in front of City Hall. It’s a birthday present in advance, commemorating the city’s 25th anniversary in 2024. It mixes scenes from the past with those of the present.

Charles Albano, chairman of the three-year committee, said the mural is one of the ways the group hopes to boost local businesses.

Manchester muralist Jyl Diane Bittbenner was chosen to paint the mural, which was done in sections of 4 feet by 8 feet in her studio. Some of the selected scenes were chosen because of their historical significance, while others reflect current efforts to be “a small but vibrant community,” said Albano.

Albano said Bittbenner worked closely with community partners and did research with the Warner Historical Society.

The eight-judge panel, comprising several artists, city officials, a member of the Warner Historical Society and the owner of the wall, chose Bittbennner from eight nominations from New Hampshire artists.

The pandemic has added complications to the project, with many meetings taking place virtually rather than in person. Despite this, the mural was completed about a year after the call for nominations was launched.

â€œThis is what makes Warner so special,â€ said Albano. â€œIt’s a wonderful example of how the community comes together under difficult circumstances. “

Warner businesses, especially its restaurants, have been hit hard by the pandemic and several have changed owners and names.

Just months after the start of the pandemic, Schoodacs CafÃ© owner Darryl Parker decided the obstacles from the coronavirus were too great. He has closed. This business has been sold and has been operating as Cafe One East since it reopened. The cafe hosts live music on Sundays and serves coffee drinks and pastries throughout the week.

The Foothills, a 15-year-old restaurant in town, stuck with take-out and the paycheck protection program for a while, but in July 2020 they also announced they were throwing in the towel . About a year later it was sold to new owners and became The Kitchen Warner, moving from a location in Andover, which just started serving customers last month.

The local, which was in the building owned by Bob Egan and Rhonda Rood where the mural is located, announced in April that after eight years it would close. The restaurant has been sold to the owners of the Flannel Tavern in Chichester, who are making improvements before planning to reopen.

Other companies have banded together and, so far, have seemed to rise to the challenges. Katharine Nevins of MainStreet BookEnds told the Granite State News Collaborative last summer that she worked with her neighbors in the Warner Public Market to coordinate curbside pickup times, so customers can make two stops at the same time .

â€œMain Street is really booming,â€ Nevins said. “These companies … we all react [to the pandemic], and the community responds in terms of support.