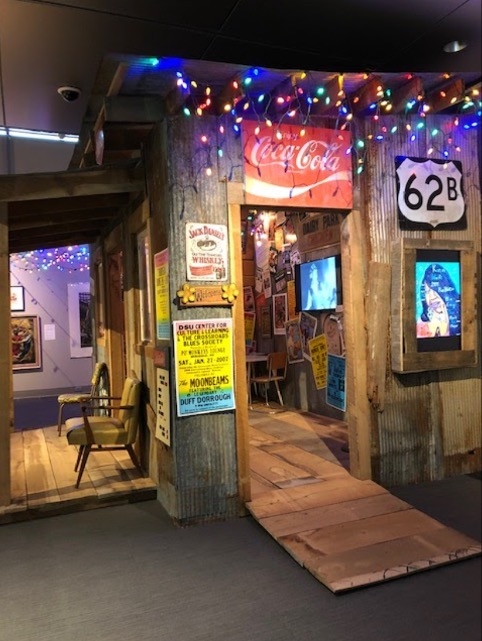 “The Juke Joint Project: An Exhibition”

As part of the Pryor Center Presents lecture series, blues historian Cliff E. Jones will present “The Arkansas Delta Blues” at 6 p.m., Wednesday, June 22, at the David and Barbara Pryor Center for Arkansas Oral and Visual History in the Fulbright College of Arts and Sciences. The conference is organized in collaboration with The Juke Joint project: an exhibition, which is co-sponsored by the Pryor Center and The Music Education Initiative and is currently on display in the atrium of the Pryor Center.

The conference will take place in person and via Zoom. If you would like to attend virtually, please register in advance with an email address associated with your Zoom account. Registration is not required for in-person participation.

The Arkansas Delta Blues played an important role in the development of American music. The area maintained a vibrant blues scene from the 1920s through the 1970s. Early blues musicians such as Son House, Robert Johnson, Johnny Shines, and Howlin’ Wolf performed at area juke joints and cafes. Folklorist Alan Lomax recorded St. Francis County blues musicians on his Southern Journey expedition in 1959 and chronicled these experiences in his classic work, The land where the The blues have started. Over the following decades, many musicians died and the music changed, but the stories of these legendary artists and their important cultural contributions remain strong.

In conversation with Rex Nelson, Jones said, “Mississippi has done a great job preserving and promoting its history of blues music. It has a trail of historical landmarks, festivals, magazines, and college conferences. But the Arkansas Delta was also home to a vibrant blues scene from the 1920s through the 1970s. This history is still alive but rare. We must support all efforts to record, document and perform the Arkansas blues. Jones’ presentation will highlight some of Arkansas’ connections to the blues and share stories from those who attended the performances and frequented the venues.

Jones is associate director of the Delta Center for Economic Development at Arkansas State University. He began his career as Executive Assistant to the Chancellor and Assistant Instructor at Baton Rouge Community College. Jones later served as a founding faculty member and department chair, then dean of arts and technology at Cy-Fair College in Texas. He returned to Arkansas in 2008, working as Vice Chancellor for Academics at the University of Arkansas Community College in Batesville. He later served as Senior Vice Chancellor for Learning and Teaching at Arkansas State University Mid-South.

Jones received his BSBA and MPA degrees from the U of A and his Ph.D. in Educational Administration from the University of Texas at Austin.

The Pryor Center is located at 1 E. Center St., Suite 120. The event is free and open to the public, and parking is available in Fayetteville Square.

About the University of Arkansas: As Arkansas’ flagship institution, the U of A offers an internationally competitive education in more than 200 academic programs. Founded in 1871, the U of A contributes more than $2.2 billion to the Arkansas economy through teaching new knowledge and skills, entrepreneurship and employment development, discovery through research and creative activity while providing training in professional disciplines. The Carnegie Foundation ranks the U of A among the few American colleges and universities with the highest level of research activity. US News and World Report ranks the U of A among the top public universities in the nation. Learn how the U of A is working to build a better world at Arkansas Research News.