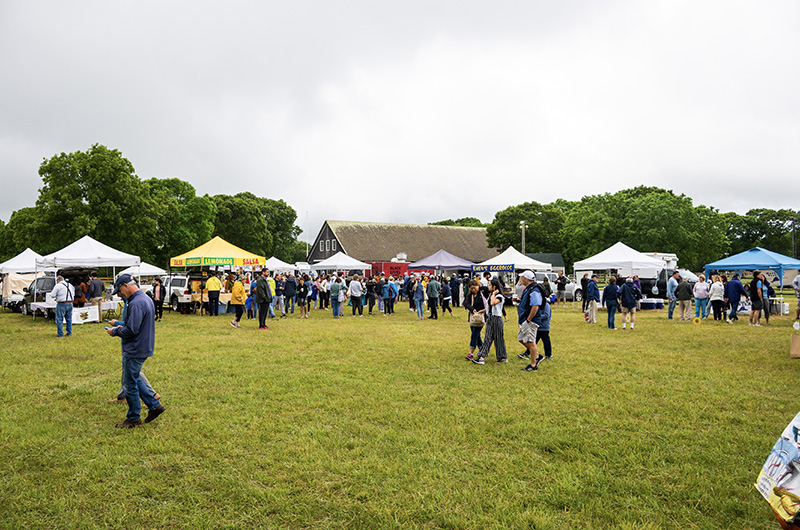 The West Tisbury Conservation Commission agreed on Tuesday to support the return of the Farmers’ Market to Martha’s Vineyard Agricultural Society for a third season this year, based on a new plan for the popular market that aims to reduce the effects of human and automobile traffic on the property with restricted conservation.

In a letter to the commission last month, the agricultural society’s executive director, Lauren Lynch, proposed moving market vendors to the area used by vendors during the August fair, and moving the public parking lot from the hay field to the vendor parking lot and nearby sites that are not part of the Perpetual Agricultural Preservation Restriction (APR) that protects company land.

The Conservation Commission, which owns the APR jointly with the Vineyard Conservation Society, voted unanimously on Tuesday to sign a letter thanking Ms Lynch for her proposal.

“This is the kind of plan we were hoping for when VCS and the Conservation Commission jointly expressed their concerns. . . Testing the mitigation plan on a trial basis therefore makes sense,” the letter states, before proposing a voluntary parking donation and a car count and weather monitoring program.

In the letter, the commission also pointed out that the rental of company facilities for agriculture-related events such as farmers’ markets is specifically included in the language of the RPA.

But the conservation commission does not have the last word.

In a separate step, the agricultural society also applied to the West Tisbury Zoning Appeals Board for a special permit to host the market at the fairgrounds. A hearing is scheduled for Thursday evening from 5:55 p.m. at West Tisbury Town Hall.

“We understand that you should always approach the ZBA. We do not intend to address the issue of zoning adequacy here,” the conservation commission said in its letter.

At Tuesday’s meeting, the conservation commission also voted to co-sign, with VCS, a letter to the ZBA asking that any special permit action taken by the council align with the farm conservation restriction.

“It prohibits detrimental uses of the property, while allowing commercial uses that are limited in nature and directly related to the agricultural purposes and educational function of the landowner MV Ag Society,” the letter reads in part.

Held for decades at Grange Hall on State Road, the farmers’ market received special permits to operate in the agricultural society during the pandemic summers of 2020 and 2021.

Market organizers and society now want to make the arrangement permanent, as it provides more retail and parking space and avoids scheduling conflicts with the heavily booked Grange Room.

Before the pandemic, there had been intermittent discussions for years about moving the market to the agricultural society grounds off Panhandle Road. The growing popularity of the market had caused traffic jams on Saturday mornings during the summer months, raising concerns about the impact on the quiet, rural nature of the village of West Tisbury. The town center is home to the Alley General Store and 7a Foods, the West Tisbury Congregational Church and the Field Gallery, in addition to the Town Hall and the Grange. But agreement on whether to make the move was elusive, including between market organizers and vendors.

The land of the agricultural society is located in a residential area. At Tuesday’s meeting, conservation commission chairman Whit Griswold said his board had received no correspondence opposing the request.

“I haven’t heard any protest from the goalscorers, and it’s now been broadcast enough that they’re aware of what’s going on,” Mr Griswold said.

Is Seymour the home of the burger? Find out on the show “Messy History”