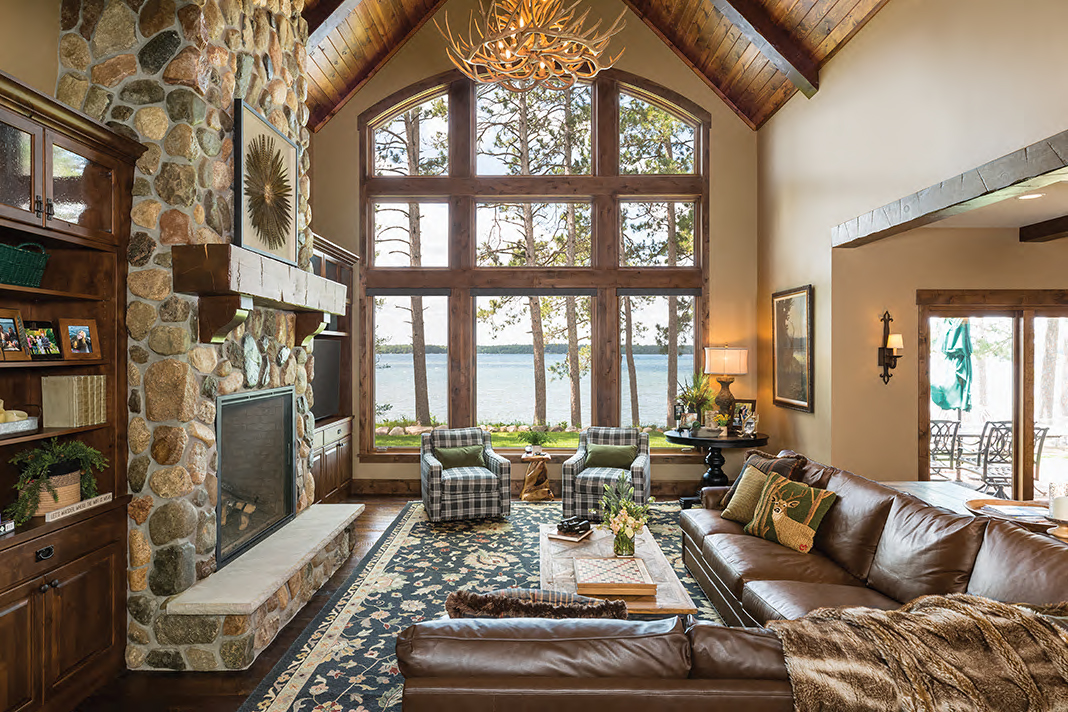 Shannon and Mike, the husband-and-wife owners of this rustic-inspired lake house, say they’ve always wanted a cabin, but until recently life was just too hectic. “We have four children and their activities have kept us so busy,” Shannon explains. “But when our eldest started high school, we decided to get serious about finding a place.”

They began their two-year search and found the right place in 2016 – an 11-acre property with two log cabins located on a quiet lake outside of Nisswa. The larger cabin was updated and featured a few bedrooms, a loft and a porch with just enough room for the family. Guests could stay in the smaller cabin, they thought. While it worked, it wasn’t an ideal long-term plan for what they hoped would become a legacy property.

They enjoyed the cabin as it was for the first few years, a time Shannon calls “the dream phase” when they began to imagine what they would want from a new lakeside home. It also allowed the family to find out how they used the property. The flat area between the cabin and the lake was popular for garden games and watching sunsets, for example, and older children enjoyed the independence of having a separate cabin when they had friends over. And they all loved the long, winding tree-lined driveway and how it created a sense of anticipation.

Their vision was a year-round home with lots of beds and space for large gatherings, so “if one of our kids wanted to raise 10 friends, everyone would have a place to sleep,” Shannon says.

It was equally important to the family to maintain the property’s heritage – a pristine woodland setting with west-facing views and a slight elevation. Shannon and Mike also wanted to pay homage to the cabin’s original design, especially after finding its hand-drawn blueprints from 1937.

The couple worked with Nor-Son Custom Builders and architect Travis Miller, AIA, to design and build the new main house, using the property’s old cabins as inspiration for the design. Shannon adds, “We wanted our lakeside home to have stories and feel like it’s been around for a while.”

When they demolished the smaller cabin (they kept the larger one, which was once the main house, to serve as a guest cabin), Nor-Son saved many pieces of wood, as well as some doors and windows. , and used them in the new house to create a link between the past and the future.

The classic “Northern” design features a vaulted main room and an open kitchen that faces the lake. Lots of dark wood adds a warm feel to the 4,000 square foot home — knotty alder on the trim and doors, hand-hewn white pine beams, and tongue-and-groove ceilings. Wood salvaged from a Wisconsin barn was used on the floors and a few accent walls to give depth and history to the home.

Nan Sloan, senior interior designer at The Sitting Room, was brought in early to help realize the couple’s vision of a traditional, slightly nostalgic family retreat. One of her contributions is a lakeside mudroom she designed with Shannon, an ingenious space that serves as a transition zone between the outdoors and the main living space. “We thought of everything a person spending a day on the lake would need,” says Shannon. It has slate flooring, a bathroom with a full-length mirror, washer and dryer, towel racks, lockers, a beverage center, and a pantry with snacks. It’s convenient to pack and eliminates wet, sandy foot traffic in the main part of the house. The bedroom also has a chalkboard that Shannon uses to mark special days and inform late sleepers of daily activities.

Sloan incorporated Shannon’s favorite shade of green throughout the house and added a wall
paper with lake-inspired designs in small pieces. Everything had to be simple, durable and comfortable, so she chose leather, wool and indoor/outdoor fabrics in darker colors.

A giant dining table was on the family’s must-have list, and a 7-foot double pedestal table did the trick. With two optional sheets, it can comfortably accommodate 12 people. Sloan chose a combination of benches and chairs for flexible seating, adding, “You can fit more people on a bench, especially children.” It has a stained and brushed finish that will stand up to a lifetime of meals, card games, puzzles, and whoever can be pitted against roller coasters.

There is a relationship between the main house and the original cabin – they are within sight with a grassy area in between, and the house has a patio with an outdoor fireplace that attracts cabin residents. invited for gatherings. Across the patio is Mike’s favorite place to hang out: a screened porch with a fireplace and a TV for watching baseball games in the summer and football in the fall.

Shannon and Mike tried to preserve as many trees on the property as possible, and Nor-Son took measures, such as installing vertical trusses, to prevent damage to trees along the narrow driveway. However, they had to remove some to accommodate the new house. “We lost one beautiful white pine in particular,” Shannon says. “We used it to build our fireplace mantels and have a picture of it in our hallway.”

One of Shannon’s favorite spaces is the upstairs bunk room, which features reclaimed doors, adorably decorated storage nooks for travel bags, and windows from the original guest cabin. It has bespoke bunk beds made by a local craftsman and sleeps 11 people. The upstairs bathroom is also designed for groups. With a separate toilet room, a shower room and a large sink with three taps, it is designed so that more than one person can use it simultaneously.

Shannon says the kids don’t have designated rooms and they can choose to sleep in whichever they want, except for her and Mike. Located on the ground floor, it is at the quieter end of the house and features a fire pit and large sliding glass doors that open to the lake view. The elegant private bathroom has an earthy wooden wall and a bathtub. “At the end of the day, it’s a peaceful place to go,” Shannon says.

Since the end of the project, the family has used it for themselves and to host bands (including 30 middle schoolers) – performing as Shannon and Mike hoped. Shannon adds: “We want to make memories here and knew if we did this right the property would stay in the family forever.”