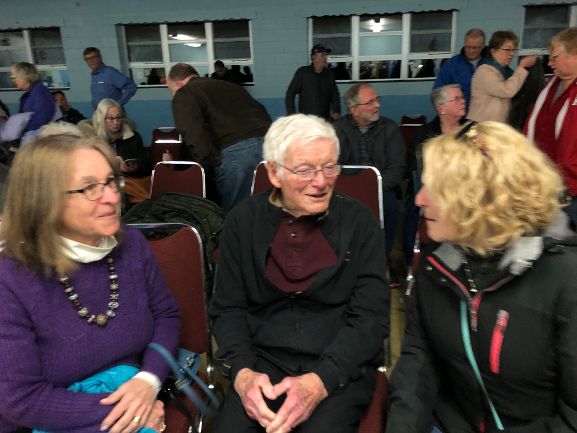 HUDSON — Longtime Hudson businessman Thomas “Tuck” Walsh traced the history of the Tuck gas station on Broad Street from 1936 to 2022 at a meeting of the Hudson Historical Society on March 29 at First Federated Church Hall.

Many former employees and customers flocked to the hall to hear it, coming together just months after the station closed last year.

Walsh, who retired in 1998, said he was honored to be asked to tell the station’s story, “because I thought maybe my friends and clients had forgotten who I was. was”.

Walsh took over ownership of the then-economical gas station in 1952 and retired when he sold it to his son-in-law, Marty Libby, in 1998. “The seeds of what eventually became the gas station of Tuck were planted by my uncle Francis ‘Sid’ Walsh in 1936,” Walsh said.

The original facility consisted of a small block building, an open service pit, and two old gas pumps out front.

Walsh became a Texaco dealer and accepted credit cards after buying the station in 1952. He recalled that a grease job in 1953 cost $5.20. Retreads are $19 and are brand new
the tires were sold on a $2 per week installment plan.

In the 1960s it became an international harvester dealer and Fisher snow plows were
added. Over the years, additional revenue has been generated from the rental of cargo trailers, Hertz trucks, and pop-up camper trailers.

In the 1970s, Walsh and his employees dealt with the oil embargo, when oil quotas were imposed on Western countries.

He said the embargo had brought “limited supplies, long queues, short tempers and uncontrollable fear”. He remembers his daughters being “brave enough to put up a sign designating the ‘last car’ in line”.

During the 1980s, when the truck sales and service business began to expand, “Tuck’s Truck Sales” was formed. A new adjacent building was constructed, and in 1981 the GMC line of trucks was added.

After 1998, the service station operated under the ownership of Marty Libby until it was sold in October 2021. Notably, “Tuck’s Service Station” has always been a full-service station.

Walsh, now 92, said he was proud to create an employee profit-sharing plan, which was funded by the company and encouraged employees to stay long-term.

The Hudson native and longtime resident praised the loyalty of its part-time and full-time employees, and “the incredible number of loyal customers.”

Stating that he has seen many changes over the past 70 years, he said two that are close to his heart are the fact that full-service stations are now “almost extinct”.

“[It’s] pump your own gas, no free air, no window washing, no knowledgeable person to diagnose unusual sound,” he said.

He also noted that “the cost of an oil change in 1953 is now the cost of a gallon of gasoline!”