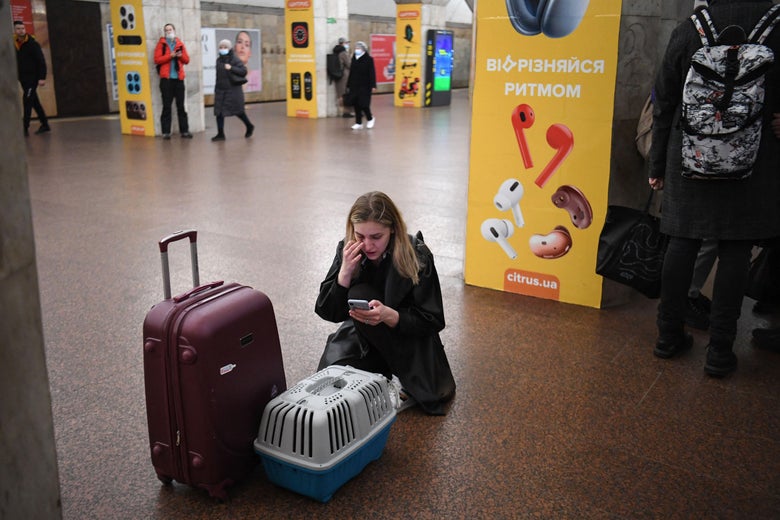 Ukraine might be the most documented war in human history.

It has been less than 24 hours since Russia invaded Ukraine, yet we already have more information about what is going on there than we would have in a week during the Iraq war. Already, Google Maps has revealed Russian armored invasion routes due to local civilians caught in traffic, prompting Google to send out alerts. We know almost exactly when the Russian forces began their helicopter air assault near Kiev. We know that one of two russian soldiers captured by Ukrainian forces on Thursday is probably 20 years old – a journalist found his social media account.

If you are interested, you can find pictures of Airstrikes, ground battles, Russian helicopters shot down, civilians targeted. Most do not come from traditional sources. The amount of information circulating live is so great that there are entire social media accounts devoted to the analysis of Russian and Ukrainian combat strength, front lines and equipment losses to the vehicle. This amount of widely available information is unprecedented for a major conflict. Ukrainians post fight footage on Reddit for engagements that are still in progress. Even TikTok has become a source for those who want to follow current events in the country.

It takes time, personnel and equipment for media organizations to produce live reports on any event, especially a conflict. These are the things that will limit the efforts of news agencies to establish a full picture of what is going on. What comes out of Ukraine is simply impossible to produce on such a scale without citizens and soldiers across the country having easy access to cellphones, the internet and, by extension, social media apps. Full-scale modern warfare will be broadcast live, minute by minute, battle by battle, death by death, all over the world. What’s happening is already horrifying, based on the information released on day one alone.

Official messages from Ukraine can sometimes seem jumbled and confusing, but very few governments, if any, could follow all the stories that are happening. Such confusion creates ample opportunity for misinformation to spread and for actors to exploit it, which they already have.

When I was a US Army reporter/photographer in Iraq in 2016, a same-daytime the turnaround time was considered quick by MoD standards. If I could get footage and interviews from a firebase outside Mosul on Christmas into the living rooms of Americans at home before the New Year, that was a win. In fact, it ended up taking me “only” two days.

Half a century ago, the widely televised Vietnam War fundamentally changed the way the world viewed the conflict. There could be no more rosy reports from the front lines through radio shows that spoke coldly of the fighting or photos that took weeks or months to arrive. Now people could view footage from the front lines of battle in their homes just days after the events, the reality of the fighters’ actions and their effects, easily visible to all. Whether the images increased or weakened support for the conflict is up for debate, but the conflicts are said to take place in the living rooms. and now the battlefield. By the time the United States invaded Iraq in 2003, it was clear that the world was watching and it took an intentional effort to guide those eyes to the intended message.

The explosive growth of the Internet and related technologies over the past two decades has been a game-changer, beginning with the Arab Spring in late 2010 (the “first live-streamed revolution”), when social media served as a megaphone to the outside world, and through the Syrian Civil War afterwards. Raw, often brutal footage was captured by participants who were often engaged in a struggle for survival as they took the footage. At these “early” events, much of the information from these events reached outside audiences through key interlocutors who then disseminated the images around the world.

Nationally, we have seen an evolution of this media landscape during the George Floyd protests in 2020, himself a continuation of the efforts initiated by images of police brutality broadcast on social networks. Within hours of Floyd’s murder, footage of the event had spread internationally, sparking perhaps the biggest protest movement in the country’s history. The interlocutors were no longer so important. The amount of information from the protests was astonishing: hundreds of videos documenting individual cases of police violenceattacks on demonstrators and suspected “infiltrators” seeking to provoke violence. Users of social media sites even took to forums to ask the military what they would do if ordered to attack American civilians.

Two years later, the information environment has evolved further. Embedded journalists are now posting live content on Instagram highlighting the fights on the ground. The first images of the invasion of Ukraine did not come from the press crews at the border, but from CCTV footage which was published online. Journalists create up-to-date data on the frontlines of the conflict based on geolocation of fights reported on social media. All atrocities will have dozens, if not hundreds of witnesses streaming footage within minutes.

The scale and impact of what is happening and what we are seeing cannot be underestimated. We are witnessing a massive conflict – the scale of which has not been seen on the continent for nearly 100 years – rock Europe’s second largest country. From our offices, our porches, our cars and our schools, we can watch the battles as they unfold. What could that mean? It is too early to tell. But it means a historic shift in how we fight and how the world looks at those fights.