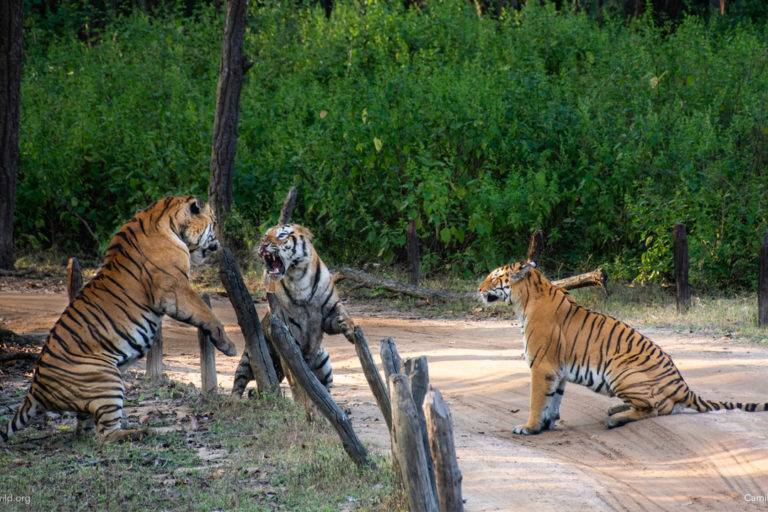 What is preventing some countries from keeping their tiger conservation promises? (remark)

Why are transparency and accountability important in tiger conservation?

Tiger conservation was already on the agenda of conservationists and biologists long before the UN introduced CITES in 1975. There have been ups and downs in the last century, but the absolute lowest was in 2010, when the number of tigers in the wild fell to around 3,200. The 13 tiger range countries and relevant organizations met in St. Petersburg, Russia, for the so-called summit of the Global Tiger Initiative (GTI). 2022 will see another tiger summit but, despite all good intentions, some countries will still act as if saving tigers from extinction isn’t serious business.

Panna Tiger Reserve is one of 53 Tiger Reserves in India and was declared as such in 1994. In 2007, it received an Award of Excellence from the Indian Ministry of Tourism for being the best maintained park in India. ‘India. Immediately after the news of the award, the buzz started. India sent a Special Investigation Team (SIT) and the 2009 report showed that the government, forest management and staff had swept poaching incidents under the carpet. “Tourism comes first” was a major conclusion of the official report. It turned out that officials looked away when the poachers struck. The result: Panna had lost all of his over 40 tigers in six years.

In many parts of the world it is a shame to lose face. Panna’s example showed that the people involved were just afraid of becoming a shame by admitting what was going on. Their fear has led to devastating results for the tigers.

For the rest of tiger conservation, it’s no different. Environmentalists, NGOs and governments all have their secrets. They all cover themselves up because they fear the consequences.

There have been many estimates of the number of tigers in the past. The most common is that in 1900, the population of tigers in the wild was estimated at around 100,000, spread across 30 countries as we know them today. There were nine subspecies of tigers, three of which lived on the Indonesian islands of Bali, Java, and Sumatra.

Due to the human impact (politics, growing population, growing wealth, greed, intensive poaching), tigers began to lose their habitat rapidly. By 2010, the number of tigers in the wild had fallen to around 3,200, with only 13 countries remaining in the tiger range. At this historic low, the World Bank, although not a regular player in tiger conservation, decided to act. That year, all tiger range countries and tiger conservation parties came together to discuss the alarming situation.

The Global Tiger Initiative (GTI) was the starting point for a global tiger recovery program: better conservation, better law enforcement, greater awareness and more funding. The Parties also agreed to double the number of tigers before the next Year of the Tiger (2022), formalized in the St. Petersburg Declaration on Tiger Conservation.

The number of tigers in the wild today is still unknown. But if all recent public numbers were combined with historical numbers and never updated, the number would be around 4,600. If all goes according to plan, all tiger range countries will report their numbers. ahead of the next tiger summit, presumably held in Vladivostok, Russia. But don’t be surprised if some countries won’t.

Tiger counting methods have evolved over the past 30 years. Thanks to the “pugmark method”, the experts were able to identify which tiger belonged to which pugmark. However, despite considerable efforts, the reliability was low, so the method had to change.

Other methods were used, such as counting scratches on trees and extrapolating data from recorded areas based on educated guesses. But the biggest step forward was when camera traps were introduced. Most of the tiger range countries now use them to register tigers. But there is still room for improvement.

â€œSpending a lot of money and placing cameras without capture-recapture protocols is pointless. The longer you keep the cameras, the more tigers will be, â€said tiger expert K. Ullas Karanth, director of the Center for Wildlife Studies, India, in 2020, as quoted by The Federal, a digital platform. Indian.

After continued criticism, India – considered the main tiger range country – admitted that there was no possibility of “data reconciliation”, “peer review or peer review.” contributions from other professionals’ in the current scheme of things.

Since the IWG, several countries have felt responsible and have started to act on what had been agreed. Over the past 11 years, for example, India, Nepal and Bhutan have shown their willingness to save tigers by using sophisticated counting and census systems every four years to show conservation progress. Counting and transparency have also taught them how to improve their policies and operations.

Saving the tigers for India was more important than saving face, and it shows.

What about other tiger range countries?

Most tiger NGOs and international media still mention that there are still 13 tiger range countries left in the world, presumably not to offend the governments of the three countries who have lost all of their remaining tigers in the past. Last 11 years: Cambodia, Laos and Vietnam.

Bangladesh has grown from over 400 tigers to just over 100. Malaysia has yet to release the results of the 2019-2020 tiger census, although they are already known. According to WWF, preliminary results from this survey show Malaysia has lost at least 60 percent of its 500 tigers since 2010.

China, Thailand and Myanmar have not reported for the past 11 years, despite their commitments to the IWG. The same goes for Indonesia, which once had three species of tigers: the Balinese, the Javan and the Sumatran. The Bali and Java tigers are already extinct due to overhunting, but today we see different challenges. Palm oil and timber are essential to the Indonesian economy. For decades, large parts of the island of Sumatra have been harvested for timber and then burned to grow palm trees and produce palm oil. NGOs are continuously reporting this, fearing the loss of Sumatran tigers, the entire ecosystem and people falling ill due to the endless layer of smoke on the island.

Until now, Indonesia has never conducted a tiger census. There is no official reason why the country is still not transparent about its tiger numbers, but the prospect of losing face again after losing the Balinese and Javanese tigers seems to play a big part.

How is it possible that, despite the written declarations signed by presidents, ministers and all concerned tiger organizations, the results of the last 11 years in tiger conservation are far from what had been agreed? This is because there is no accountability and no oversight.

The tiger range countries are responsible for tiger conservation efforts and hold themselves accountable for their methods and results. There is no authority above them, so they can do whatever they want.

Unfortunately, most countries did not prioritize tigers, as they promised in 2010. The reasons could be that palm oil production has been higher for Malaysia and Indonesia; or that the Chinese wildlife mafia has been more influential than expected in Myanmar, Cambodia, Laos and Vietnam; or that the need to keep people out of the protected Sundarbans – the world’s largest mangrove forest – has not been possible in Bangladesh.

Bangladesh, Cambodia, Indonesia, Laos, Malaysia, Myanmar and even Thailand have failed in a way. All parties involved in tiger conservation know this. But no one has the power to tell failing countries to step up their activities, their budgets and their results. Meanwhile, the world is losing more and more tiger habitat.

A change is needed

At the next summit in 2022, all tiger range countries will decide how to proceed for tiger conservation. New vows will be taken, but without active changes, these vows will be as worthless as most of those taken in 2010.

The changes must involve transparency, accountability and the creation of a supervisory authority. These reforms must lead to a system in which countries can learn and be challenged and also receive financial and economic sanctions if they fail to meet the targets, ideally monitored by independent media and scientists.

Tiger conservation cannot end like the Panna Tiger Reserve. India has understood this message well. Now is the time for the worst performing countries to realize that saving face is not an option. What has happened in Cambodia, Laos and Vietnam over the past 11 years cannot happen in other tiger range countries. We need to protect our tigers. Now is the time for transparency and accountability.