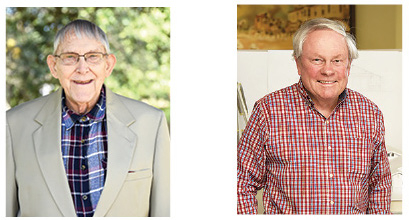 To honor their commitment to Pleasanton, Bob Williams and Charles Huff have been named the 2022 recipients of the Ed Kinney Community Patriot Awards.

Named in memory of former Pleasanton Mayor Ed Kinney, the Community Patriot Awards are presented annually to those who exemplify through actions of love, pride, faith, belief and dedication to the community.

“As Margaret Meade said, ‘Never doubt that a small group of citizens can change the world…it’s the only thing that has ever changed’, and this year’s winners have worked to make our part of the world a better place.” said W. Ron Sutton, rewards program founder and president of the nonprofit Make A Difference, Today & Always.

Born in Norristown, Pennsylvania, Williams emigrated to California in the 1970s where he taught music in the Oakland Unified School District. Shortly after arriving, Williams began playing horn in the Pleasanton Bicentennial Band and became bandleader of the Pleasanton Community Concert Band.

Throughout the 1970s and 1980s, Williams worked with teacher Adele Denny to lead an annual musical show at Amador Valley High School. He was the first conductor of the Pleasanton Playhouse. In 1995, he played horn for the Valley Dance Theater and in 1998 became the group’s conductor for the spring productions and “The Nutcracker”.

Williams donated his university of music books to Las Positas College, cornets to the Salvation Army Band in Concord, and horns to his alma mater, the Eastman School of Music in New York at the University of Rochester, where he has created a scholarship for horn students.

He continues to play for the Livermore-Amador Symphony Orchestra, which he joined in 1972 and has been a judge for the Pleasanton Cultural Arts Council’s YEA Awards program for the past few years.

As an architect, Huff has designed over 1,300 homes, served as a volunteer for the restoration of Pleasanton’s original town hall in the 1980s, and helped restore the historic train station in downtown Pleasanton.

He served on the board of the Amador-Livermore Valley Historical Society/Museum on Main for over 30 years. Huff was additionally a founding member of the Rotary Club of Pleasanton North, served as a history preservation consultant for the town of Pleasanton, and taught adult education history classes and developed local history tours for students. of third year.

Huff was also a member of the Pleasanton Downtown Design Review Committee, was on the committee to help secure the first all-weather runways for Amador Valley and Foothill High Schools, created a video for the Historic Pleasanton Downtown Stroll (1850-2002) and wrote a historical column for the Valley Times and Pleasanton Weekly between 1998 and 2015.

Huff was also named the recipient of several Pleasanton Chamber of Commerce awards for his work and community involvement. He received the 1990 Community Service Award, the 1996 President’s Award, and the 2006 Distinguished Individual Service Award.

Williams and Huff receive their award at a reception for family and friends Monday, April 25, outside the Museum on Main. Additionally, the 2020 recipients – veteran and founder of Pleasanton Military Families Chris Miller and philanthropists Joyce and Bob Shapiro – will be honored at the ceremony next week.