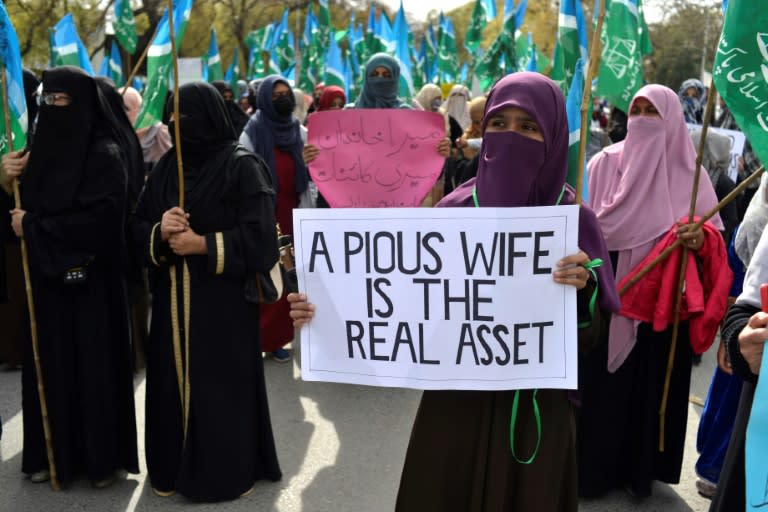 Women rally in Pakistan despite attempts to end protest

About 2,000 women gathered in the Pakistani city of Lahore on Tuesday despite efforts by authorities to ban the protest and remove security from an event often the target of violence.

The rallies on International Women’s Day have received a backlash since they were adopted four years ago in deeply conservative and patriarchal Pakistan.

In a society where women have been shot, stabbed, stoned, set on fire and strangled for violating family ‘honour’, critics accuse rights activists of promoting liberal Western values ​​and disrespecting religious and cultural mores.

On Tuesday, dozens of events marking International Women’s Day – known as the Aurat March in Pakistan – took place across the country.

Non-violent counter-protests, dubbed “hijab marches”, were also organized by women from conservative religious groups in Karachi, Lahore and Islamabad, where participants called for the preservation of Islamic values.

In the eastern city of Lahore, city officials urged organizers to call off the rally for security reasons and threatened not to provide security.

Following a legal challenge, the Lahore High Court decided that the event could take place and the authorities agreed to provide protection.

The women marched through the streets in a jovial mood, chanting slogans such as “Give respect to women” and “End the patriarchy”.

They were guarded by riot police – and greeted by a small group of men chanting ‘Stop this obscenity’.

Student Sairah Khan, 23, cited recent high-profile cases of brutal violence against women “with no consequences” for her dating.

In Karachi, Pakistan’s largest city, around 1,000 women gathered in a festival atmosphere, with organizers carrying out security checks while police stood idly by.

“We have only one watchword: equal pay, protection and peace,” chanted a woman from a stage.

In the capital Islamabad, around 200 women gathered outside the city’s press club.

“We came to make our voices heard and to highlight our problems,” said student Fatima Shahzad.

They were overtaken by more than 400 counter-protesters from extremist religious parties.

But the organizer Farzana Bari promised “we will continue to assert ourselves”.

“It was the women who refused to bow down,” she told AFP.

In 2020, groups of extremist Islamist men showed up in vans and threw stones at women as they drove through Islamabad.

Doctored videos and photos of last year’s events have been leaked online and have even appeared on popular TV shows falsely accusing women of chanting or wearing blasphemous slogans – an act punishable by death in Pakistan.